The Tourist Office of Bougival organizes exciting guided tours for groups Tour 1 : In the footsteps of the Impressionists Tour 2 : Vestiges of the “machine de Marly” Tour 3 : Along the river Seine… Tour 4 : Bougival, a village through the centuries We can also organize customized private tours upon request.  Do […] 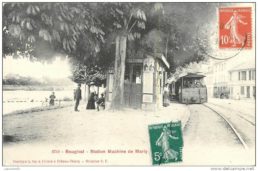 It was not until 1838 that a first lock was built to make sailing possible on the other branch of the Seine, which until then had been unusable. The river very rapidly became the major communication route between Paris and the English Channel. Barge and steamboat traffic, and regular passenger services, became so heavy that […]

Bougival during the reign of the Sun King

In the 17th century, Bougival had 500 inhabitants, but not far away, in Versailles, Louis XIV undertook considerable building work which would eventually disrupt this quiet village of fishermen, winegrowers and small farmers. Indeed, in 1662, Louis XIV decided to build the Château of Versailles and later that of Marly. For 20 years, every possible […]

While springs gushed forth on the hillsides in contact with clays and marlstone, Bougival’s rivulet, the Drionne, which is canalised today, used to collect this water which long ago formed the valley of “Beudechisilo”. This patronymic, from which the name of our town originates, goes back to the beginning of Merovingian times. As early as […]

The Impressionists This was the time of the “Belle Époque”, with its promenades, its boaters, its guingettes (open-air cafés with dance floors), its restaurants and hotels. The Boating Party in Bougival and the La Grenouillère Dance in Croissy competed with each other and Parisians jostled each other at them. People went boating everywhere, regattas and jousting events […]