This house, which was rented by Georges Bizet, was built in the 19th century on the banks of the Seine, at the very entrance to Bougival as you come from Rueil Malmaison. It is obvious that there used to be considerably less traffic than there is today even though, at the time of the Belle […] 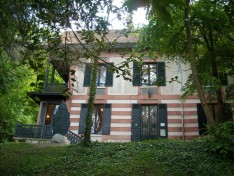 Ivan Turgenev’s datcha A former estate of La Chaussée, which had belonged to the de Mesmes family, from whom the Empress Joséphine had bought it in 1813. The Palladian-style house was built in 1830. In 1874, the property was bought by Ivan Turgenev who later sold it to the opera singer Pauline Viardot, Maria Malibran’s […] 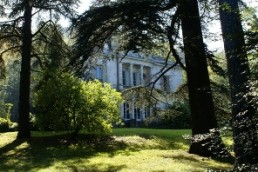 This property, one of the oldest in Bougival, dates back to 1830. The property of Les Fresnes was part of the La Jonchère estate at the beginning of the 19th century when Eugène de Beauharnais lived there. It was then that this house must have been built in the neo-classical taste of the period, reminiscent […]

Berthe Morisot lived and worked in Bougival, at 4 rue de la Princesse (1 avenue de la Drionne) where she rented this house and she spent every summer in it between 1881 and 1884. During 1982, she spent most of the year at the house with her husband Eugène Manet and her daughter Julie. The […] 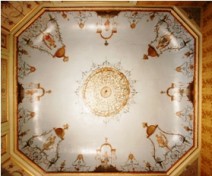 The Pavillon de Blois is all that remains of a property acquired by Mademoiselle de Blois, the legitimate daughter of Louis XIV and Mademoiselle de la Vallière, in September 1711. She stayed there until 1716. The small house by the name of de Blois which remains in the garden was one of the outbuildings of […]

Situated at the bottom of the hill, beside the Seine, this house in Directoire style with a pediment on its four sides, decorated with arched windows on the ground floor and busts on the façade, was built at the beginning of the 18th century. The elegant simplicity of its style and its position in the […] 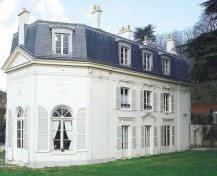 In 1770, this Empire style building, which then only had a ground floor and a first floor, was sold under a lease by Joseph, Marquis de Mesmes, Lord of Bougival and of La Chaussée, Marshall of the King’s camps and armies, to Jean-Jacques Garnier (1729-1805), an inspector at the Collège Royal of France where he […] 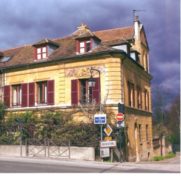 Georges Régnault was a painter who lived in Bougival from 1941 to 1979. He settled with his wife Louisette in a small house by the Seine situated at 11 rue Ivan Tourgueniev, which had belonged to Louise Abéma, a portraitist of Sarah Bernhardt and a famous painter in 1890. 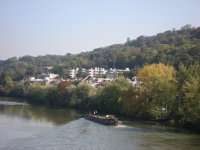 Emile RICHEBOURG (1833-1898), a famous writer and serial writer, lived at 7 route de La Celle St Cloud in a property to which he had given the name “La Charmeuse”, because it was the success of his novel “Andréa la Charmeuse” which had enabled him, in 1880, to purchase this property. 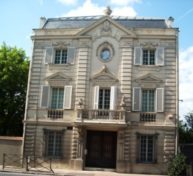 The name of this house derives from a contraction of “mauvais port” (bad port) or “port maudit (cursed port). It was indeed in this place that the Normans landed in 856 to massacre the surrounding inhabitants, before being stopped by Charles the Bald’s army. This very ornate house, characteristic of the pastiches created under Napoléon […]