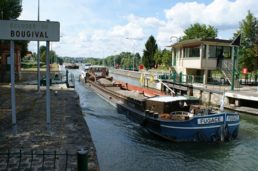 The purpose of building a second “Marly Machine”, undertaken under Charles X and later under Napoléon III, was to restore river traffic, by building a lock. The oldest of them was built in 1838 between the Island of La Loge and Gautier Island. Following an increase in the number of small boats passing through its […]